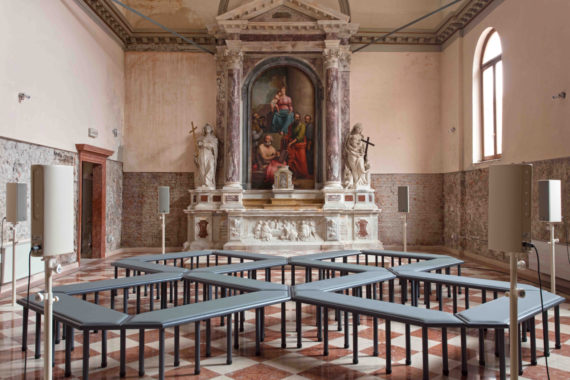 The Cardiff-born artist James Richards has unveiled his Cymru yn Fenis / Wales in Venice commission for the 2017 Venice Biennale. A collateral event of the 57th Biennale, Richards’ exhibition is commissioned by the Arts Council of Wales and curated by Chapter, Cardiff.

The 2014 Turner Prize nominee’s new body of work is titled Music for the gift and includes a sound installation, video and photographic works.

Richards is known for appropriating a wide variety of materials, including fragments of cinema, works by other artists, stray camcorder footage, murky late night TV, film soundtracks and archival research.

His new work in Venice is inspired by the space of the Santa Maria Ausiliatrice, a church and former convent located just off Via Garibaldi, situated midway between the main Giardini and Arsenale Biennale sites.

The focal point is Migratory motor complex, a new six-channel electro-acoustic music installation. The work is an exploration of the capacity of sound to render artificial acoustic spaces and then locate sonic and melodic events within them.

To create the sound installation, Richards made use of field recording, sound effects and his own voice, alongside electronically generated and recorded material. 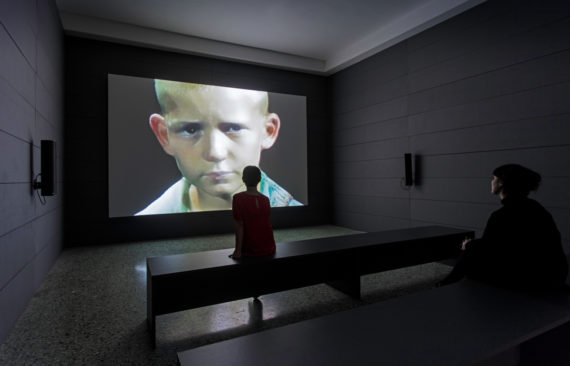 Another work on show is What weakens the flesh is the flesh itself, a video made with collaborator Steve Reinke. The starting point for the work was a series of images found in the private archive of Albrecht Becker – a production designer, photographer and actor imprisoned by the Nazis for being homosexual.

Amongst pictures of friends and photographs taken while serving in the second world war is a collection of staged self-portraits that reveal an obsessive commitment to body modification, tattooing and his own image. Richards’ video acts as an extended meditation on the archive, photography and the body.

Also on show is Rushes Minotaur, an installation of inkjet prints made up of two different images: a close-up of crumbling skin from a medical book and the tarpaulin-shielded façade of a shop. The photos were cut together and then rescanned in a process that stretched and stacked the images into different combinations.